On March 18, 2021, the world’s first low-cost intelligent mass-produced HJT project- Huasun Xuancheng Anhui 500MW Heterojunction Cell&Module Project officially began to produce. After near 1 week of commissioning and trial production, Huasun Cell Dept. announced the results of the first week of trial production on the 25th to all institutions and industry enterprises concerned about the progress of HJT heterojunction technology: in the 500MW mass production that has been officially put into production, The average conversion efficiency of HJT cells reached 23.8%, and the highest efficiency reached 24.39%!

Huasun 500MW heterojunction cell module project started in July 2020, construction started on November 11, 2020, and the first equipment was moved in on December 25, 2020. After 4 months of hard work by more than 200 people under Huasun Company, various supporting equipment manufacturers, main and auxiliary material supplier teams, and the engineering construction unit CLP Second Company team, the 500MW heterojunction cell production line has been launched on March 18, 2021. It is understood that the cell line put into production adopts YAC cleaning and texturing equipment, Maxwell and Idealenergy PECVD equipment, Maxwell PVD equipment, and screen printing equipment from Maxwell and Zonchow. The MES system released by Maxwell at the HJT2.0 product launch conference on December 4, 2020 performs scheduling and intelligent optimization of the full cell production line. In the process of capacity ramp-up, Huasun 500MW heterojunction cell module project will use the latest high-precision series welding and import silver-clad copper paste, which will greatly reduce the cost of heterojunction technology, The gap between the unit silver consumption of HJT cell and PERC cell will sharply narrow from about 100% in 2020 to less than 20%, and there is still room for further decline in the future, close to or even lower than PERC silver consumption, truly opening the era of low-cost mass production of HJT technology.

The company’s CEO Xu Xiaohua said, “This is only the result of the initial debugging in the first week. The potential of the production line is still great. No matter the average conversion efficiency or the highest efficiency of the produced cells still have great room for improvement!”. The company’s CTO, Wang Wenjing, also said confidently that “the average conversion efficiency of mass production exceeds 24.3% or even higher, which is just around the corner”.

Regarding the performance of the production line during the trial production, Xu Xin, who was specifically responsible for the HJT cell project, said, “We had a production ramp plan before, but in fact, during the trial production, the conversion efficiency of our first furnace reached 23.2%, and the second furnace Continue to increase to 23.8%, and the third furnace reached 24.39%, which is equivalent to one month to one and a half months earlier than the original plan, far exceeding previous expectations.”

According to Xu Xiaohua, CEO of Huasun compony, these are just the beginning. The 500MW project currently put into production is more worth looking forward to after it reaches production at the end of June after about three months of capacity ramping. According to Xu Xiaohua, Huasun will hold a production ceremony in late April,. After reaching production in June, it will immediately start the expansion of 2GW HJT cell + module production in the second half of the year to provide the global market with GW-level lower cost, higher efficiency and higher power output per watt HJT component products. 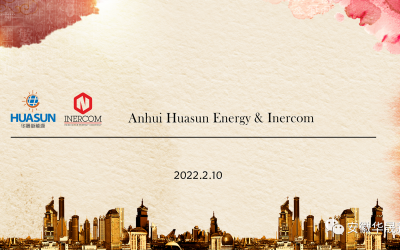 HuaSun Expands its EU market with ODM service for Tier 1 brands, the strategy of HuaSun for going international market is basically by offering ODM service initially with mutual benefits partners.